The Olde English Bulldogge is an American breed created recently as a result of crossing the American Bulldogs, English Bulldog, American Pitbull Terrier, and Bull Mastiff. These muscular, medium sized dogs have a healthy, well-proportioned, rectangular body, large head, square muzzle, almond-shaped eyes, small, rose or button-shaped ears, and a short tucked tail. Besides their athletic nature, they are also marked by a sweet and gentle disposition, making them popular as house pets. 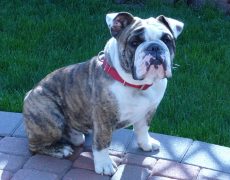 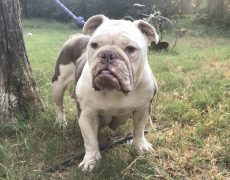 This is a comparatively new bred and was developed due to the initiatives taken by one Mr. David Leavitt of Pennsylvania who aimed in creating a breed possessing the looks and athletic nature of the dog used for bull baiting but with a lesser degree of aggressiveness. It was decided to include half of the English Bulldog blood, one-sixth of Bull Mastiff and American Bulldog and one-sixth of the other breeds. The outcome of these crosses was the Old English Bulldogge. The OEBA (Old English Bulldogge Association) developed with Leavitt’s effort and others associated in this endeavor included Karen and Ben. The OEBKC (Olde English Bulldogge Kennel Club) formed in 2001 and merged with OEBA in 2005.  In 2004 Leavitt tried to maintain the authenticity of the dogs which he bred and named them as Leavitt Bulldogges, with the Leavitt Bulldog Association being formed in 2015. The UKC recognized them completely in 2014.

Besides making for remarkable family pets because of their docile and friendly nature, they are also fearless protectors fitting the bill of a perfect watchdog. Though they share a good rapport with children of the family, emerging as their perfect playmate, this breed may not be amicable to other dogs, especially if they are not a part of its family.

Because of their agile, muscular and athletic nature, they have high exercise needs, requiring daily walks and sufficient playtime in a fenced yard. However, avoid taking them out when the temperatures are too high or low. When indoors give a lot of chewable toys to keep them engaged as they have a tendency to chew up things when bored.

Since they shed moderately, brush their coat once in a week to maintain the shine. Bathe it when needed, and also trim its nails, clean its eyes and ears as well as brush its teeth to maintain proper hygiene.

They are a healthy breed compared to other bull dog varieties and are not known to suffer from any genetic issues. However, bloating and hip dysplasias as well as insensitivity to heat are the common problems faced by them. The x-ray of hips is conducted by many breeders, who also have their dogs checked by the OFA (Orthopedic Foundation for Animals) and PennHIP (University of Pennsylvania Hip Improvement Program) to lessen possibilities of hip dysplasia.

They are friendly pets but could be stubborn at times, needing firm handling.

One response to “Olde English Bulldogge”