The Chow Pei is a medium-sized designer breed developed by crossing the Chow Chow and Chinese Shar Pei. You would definitely spot the Shar Pei’s wrinkles on most of the Chow Peis. They are further characterized by a Shar Pei-like hippo-shaped head and erect ears as the Chow Chow. Their loyal, dignified and alert nature, make them well-suited as companion guard dogs. 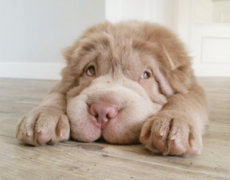 Though not much information has been derived about the motive behind developing these dogs, they might have been designed for creating an all-purpose working dog for farming and hunting just as their Chow Chow parent, also combining the guard dog instincts of the Shar Pei.

Being good companion dogs they have a loving and protective nature mostly forming a special bond of attachment with one or two members of the family, which in most cases may pertain to his owner.

Just like its parents, the Chow Pei does not get along well with children unless they are socialised to do so. Younger children of the house need to be supervised when interacting with this breed as the latter may not like to be mishandled by the little ones.

They are also indifferent towards pets of the family including other dogs and can only mingle well when brought up with them since their puppy hood.

Inheriting the alertness of the Chow Chow and Shar Pei, this mix is wary about strangers that thereby make it a good watch and guard dog, that can go to any extent to protect its family.

Having a high activity level, the Chow Chow Shar Pei mix needs adequate amount of exercise to be physically and mentally fit. Take it out on a walk on a daily basis and give it sufficient play time in your yard or at a dog’s park. He may adjust well in an apartment if he has enough space to play around.

Whether it has a long, thick, soft coat or a short-haired one, brushing needs to be done at least four times a week, however, in case of the former, professional grooming may be needed for proper maintenance. Moreover, during the shedding season (spring and even summer), increased brushing is essential. Bathe it using a dog shampoo when required and clip its nails before they get too long. Other hygiene measures include brushing the Chow Pei’s teeth twice or thrice a week and cleaning its ears every week.

This breed might inherit some of the health concerns of its parents including entropion and certain other eye concerns mostly encountered by the Chow Chow, hypothyroidism, patellar luxation, joint dysplasia, and bloating.

Training the Chow Chow Shar Pei might be challenging enough because of its independent and dominant nature, very much like its parents. Firmness, assertion and patience are the key requirements its trainer should possess to help it develop a pleasing personality.

Feed your Chow Pei with two and a half to three cups of dry dog food on a daily basis. Besides this, include adequate amount of vitamins and minerals in his diet to ensure your pet gets proper nutrition.

Press reports of 1982 have related the Chow Pei to one human attack where the victim was a child and had required hospital treatment.