The Wirehaired Vizsla (pronunciation: Wirehaired VEESH-la) is a medium-sized breed of versatile dogs used for tracking, pointing, hunting, and retrieving. It is lean and robust with a well-muscled head, pronounced eyebrows and beard, slightly oval eyes, moderately long ears hanging close to its cheeks, muscular, slightly arched neck, deep, moderately broad chest, and a thick, dense tail that is often docked. Although it is a dog of strength and stamina in the hunting field, its docile personality makes it suited for families. 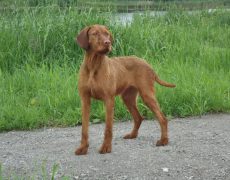 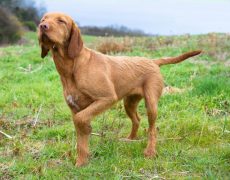 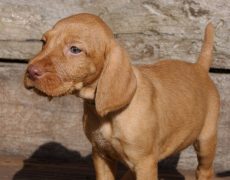 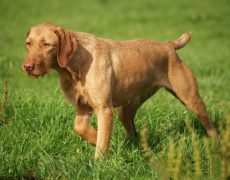 The Wirehaired Vizsla was produced in the mid-1930s by Vasas Jozsef, a renowned hunter who owned the Csabai vizsla kennel in Hejocsaba. He was assisted in his endeavors by Gresznarik Lazslo, a passionate hunter and the owner of de Selle kennel that bred German Wirehaired Pointers. They crossed two female Vizslas (named Zsuzsi and Csibi) with a liver-colored German Wirehaired Pointer (named Astor von Pottatal) to develop a muscular, heavily coated dog that could work in the cold and retrieve game from icy water.

The first recognized Wirehaired Vizsla, named Dia de Selle, was produced when the best offspring of Zsuzsi and Csibi were crossed. During the Second World War, other Hungarian kennels started developing the breed and subsequently used the Irish Setter, Pudelpointer, Bloodhound, as well as the Wirehaired Pointing Griffon blood for its refinement.

The Hungarian Wirehaired Vizsla, being powerful, resourceful, and extremely devoted, is an ideal family companion for active people who have energy and time to spare. It bonds strongly with its family members, also getting along well with kids and other pets.

It is gentle and steady in the home but is willing and tireless in the field. Although it is not an overly aggressive breed, it may become excited and take a defensive stance if threatened. Initially, the WHV can be a little aloof with strangers, but once it gets acclimated, it will feel comfortable around unknown people.

These energetic dogs require a minimum of 30 minutes rigorous activity several times per day. Make sure your WHV gets enough off-leash play in a large fenced area. Since they enjoy swimming, you may take your dog to a pool or lake to help it in burning off excess energy. Also, let your it take part in hunting, tracking, or agility training to keep it occupied.

Brushing its coat using a firm-bristled brush and occasionally bathing it with a mild shampoo will keep its coat clean. Clean your dog’s teeth regularly and keep its nails trimmed.

Although the WHV does not frequently get ill, it is susceptible to some genetic diseases including hypothyroidism, hip dysplasia, idiopathic epilepsy, sebaceous adenitis, and few eye conditions like entropion and ectropion.

The WHV sometimes has a stubborn streak, thus requiring a patient and firm hand.

Make sure your Wirehaired Vizsla is well trained to be obedient even if there are a lot of distractions around it. It means that your dog will respond to sit, come, stay, and heel commands even when a cat walks by or another dog plays next to it, and when shotguns are fired in the hunting field. A WHV should also learn to be steady and wait patiently, as it is not expected to bring back everything that falls in real hunting situations.

Get your WHV familiar to a collar and leash. Put its collar on and attach a leash when you take it outside or even at home. Then play with your pet and give it treats so that it associates wearing the collar and leash with “food and fun time.” Start in a distraction-free area and make a sound. Once your dog looks at you, offer some treats, lure it to come over to you and walk a few paces. Practice this inside and once it gets the hang of it, test your dog’s skills in the outdoors.

As a working and hunting breed, the Wirehaired Vizsla should be given a protein-rich diet. While you may feed your dog commercial dry food, you can also keep it on a BARF diet comprising meat, bones, vegetables, and fruits.