The Wirehaired Pointing Griffon (pronunciation: WAHYUHR-haird POIN-ting grih-FAHN) is a breed of medium-sized, all-terrain hunting dogs that can quickly enter dense, thorny bushes and undergrowth on land as well as swim across lakes or rivers. It has a medium-sized head, square muzzle with a prominent mustache, large eyes, high-set, close-lying ears, moderately wide chest, straight forelegs, well-muscled thighs, long shoulders, and a straight or slightly raised tail that may be docked by 1/2-1/3 length. Aside from being a tireless hunter, it excels as a pointer and retriever in the field and around water. 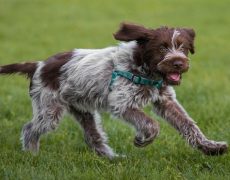 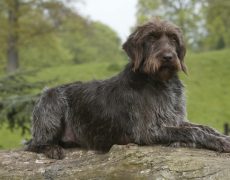 Eduard Karel Korthals, a Dutchman interested in creating a versatile gun dog that would show extreme resilience and devotion to its owner, is credited with developing the Wirehaired Griffons in 1873. Korthals set up his Ipenwoud kennel in Beibesheim am Rhein in Germany.

He started his breeding program in 1874, and crossed an Otterhound with Spaniels, Setters, and a Pointer to eventually produce three offspring – Querida, Lina, and Moustache I. The modern Wirehaired Pointing Griffons are considered the direct descendants of these three dogs.

In 1887, the Korthals Griffon named Zolette was first acknowledged by the American Kennel Club. In 1916, sixteen Wirehaired Griffons participated in the Westminster Dog Show in the US, and since then the dogs have gained popularity as an all-purpose gun dog and show dog. In 1991, the AKC recognized the American Wirehaired Pointing Griffon Association as the official parent club for the breed.

Aside from being an excellent gun dog, the Griffons are considered a loving family companion that excels in other works including tracking, agility, and obedience. Always keen to please, the Korthals Griffon loves working closely with its people and may have separation anxiety when left alone.

It gets along well with humans and can live peacefully in homes with other pets. Although it does not have the traits of a guard dog, it is always aware of its surroundings and will quickly alert its owner if anyone tries to intrude its territory.

The Wirehaired Pointing Griffon, being an energetic and lively breed, requires lots of regular activities including long walks on a leash, free runs, and short playing sessions in a yard. It also makes an excellent jogging companion and can be taught to swim in a pool.

The Griffon’s double coat may be brushed once a week to remove its loose or dead hairs. It should be bathed only when necessary since frequent bathing will soften its harsh coat. Check its ears every week for bad odor, redness, or any other signs of infection, and make sure to keep them clean and dry after swimming.

Wirehaired Griffons are usually healthy, but some individuals may get affected by serious health issues like hip dysplasia and progressive retinal atrophy.

Since the Pointing Griffon is a quick learner who is loyal to its family members, it can be easily trained.

Socialization
You should start socializing your Korthals Griffon puppy early (at 15-16 weeks of age) because some Griffons can be nervous and excitable around unknown people, dogs, and new situations. Expose your pup to people of various shapes, sizes, ages, genders, and ethnicities. You may invite your friends who have healthy, friendly, vaccinated dogs to come to your home and meet your puppy.

Easing separation anxiety
Before you leave for work, take your dog out for a vigorous walk and then reward it with treats and water. This will keep it in resting mode when you are away. Do not talk, touch, or make eye contact when leaving for the day or returning from work. Practice keeping your Griffon alone for 5 minutes, then extending it to 20 minutes, and then an hour. Continue this until you can stay away for 7-8 hours without any issues.

You may give your Griffon two to two-and-a-half cups of commercial dry food on a regular basis.