The Rhodesian Ridgeback (pronunciation: roe-DEE-zhuhn-RIHJ-bak) is a breed of large, muscular hounds known for its distinct ridge of hairs running along its back. Aside from being a versatile hunter, the Ridgeback makes a formidable guard dog and is a powerful athlete. It comes with a moderate size head, round, bright eyes with intelligent expression, medium-sized, high set ears, long, deep muzzle, brown, black, or liver nose, fairly long neck, sloping, clean, muscular shoulders, straight and strong forelegs, and a smooth tail tapering towards the tip. 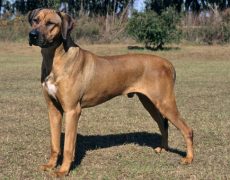 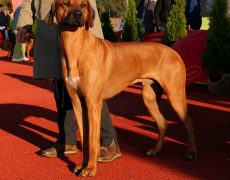 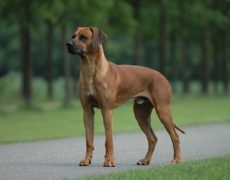 During the mid-1600s, Dutch traders set up a colony and shipping hub at the Cape of Good Hope. Although the colony flourished, the settlers wanted to start over as farmers. These people of German and Dutch ancestry came to be known as Boers (a Dutch word meaning “farmers” or “husbandmen”). Several large dogs of European origin, including mastiffs, and hounds like the Great Dane (considered to be the closest cousin of this breed as per genetic analysis), were brought by these people for guarding property and tracking big game. However, the climate, terrain, and wildlife of Africa called for a large, fearless, versatile, and quick dog. The Boers crossed their European stock with the indigenous hunting dogs used by the Khoikhoi people to create the ancestors of modern Ridgebacks.

When the Boers moved to Rhodesia, their dogs which worked in packs were agile and courageous enough to combat an animal as big as the lion.  In fact, their efficiency in hunting members of the big cat family earned them the nickname African Lion Dog and Rhodesian Lion Dog. They were a versatile breed that could be used for hunting, watching, guarding, herding, and as a docile family pet.

The first breed standard for the Ridgebacks was drawn up in 1922 by Francis Richard Barnes who founded the first Ridgeback Club. The Ridgebacks were officially acknowledged by the Kennel Club in England in 1954 while they gained recognition from the American Kennel Club in 1955.

The Rhodesian Ridgeback is a quiet, gentle family companion who is always willing to protect its people and territory from any danger. It can be independent, strong-willed, and occasionally domineering, making it difficult to handle for timid or first-time owners.

Because of its natural hunting instincts, it may chase small furry animals including cats, squirrels, and hamsters. Although the Ridgeback may get along with other pets if raised with them, it can be aggressive toward unfamiliar animals outside its family even if it is well-trained and socialized. Male Ridgebacks can show aggression toward other males, particularly if not neutered.

It is a dignified breed and can be reserved toward strangers. Although it is friendly with older children, the Ridgeback can be too boisterous for young kids and can accidentally knock them over. Always teach your little ones how to approach or touch your dog, and make sure to supervise the interactions between your kids and the Ridgeback.

Click here for the popular Rhodesian Ridgeback mixes as they are crossed with other purebreds.

Although it is not banned, restrictions on owning a Ridgeback are imposed in Ireland and Ukraine. A tragic incident of a Rhodesian Ridgeback attacking a six-year-old schoolboy from Cardiff, U.K. was reported in 2012.

As long as the Rhodesian Ridgeback gets regular activity, it can adapt to living in apartments without any problem. Keep your dog busy with play, training, as well as various dog sports like obedience, lure coursing, agility, and tracking. Give it access to a large, fenced yard and ensure that it cannot jump or climb over, or dig under the fence. Make sure that your Ridgeback has two 15-20 minute walks and playtimes regularly, as well as a few opportunities to run. If you are an athlete or long distance runner, you may also have it as a running companion.

It is a low-maintenance breed that needs a good brushing every week to remove its dead or loose hairs, and occasionally wiping its coat using a damp cloth. Its dental and nail care involves brushing its teeth 2-3 times a week and trimming its nails once a month.

Although these diseases are not common in Ridgebacks, your dog may be affected by heritable bone and joint issues like elbow and hip dysplasia, and a congenital skin disorder such as dermoid sinus in which a narrow tubular indentation occurs along the spine.

Training a Rhodesian Ridgeback can be a challenge if you do not start early. For training it successfully, you should be firm, fair, and consistent in your approach.

Socialization
To help get over its anxiety towards strangers or unknown people, imparting socialization training to the Ridgeback puppies is a mandate. Taking your puppy out on a short leash to a public place will help it become more comfortable with the unknown people around it. You may also tell your friends to come over to your place and have them stand with a treat. Let your pup go towards them first, and make sure your friends pet your dog on its chest and under its chin. Also, allow your leashed Ridgeback to interact with friendly dogs at a young age.

Obedience
To deal with an aggressive, stubborn or strong-willed Rhodesian Ridgeback, you need to encourage its obedience and respect. Teach your pet to respond to commands like sit, come, stay, go, and heel. Speak in a commanding tone and be firm with these commands so that your pup cannot deviate from the expected behaviors.

Give your Rhodesian Ridgeback 2 3/4 – 4 3/8 cups of quality dog food suitable for its age and activity level. Counter surfing is a common behavior problem for Ridgebacks, and so human foods should not be left unattended.

Comparison between Rhodesian Ridgeback and Other Breeds