The Himalayan Sheepdog (locally called ‘Bhutey Kukur’) is a breed of large size dogs that originated in Northern India and Nepal. They have a well- muscled body, with a broad head ending in a wide muzzle and strong jaws. They have overlapping ears, a strong neck and shoulders, sturdy legs and a curly tail. Many of them have a white patch on the chest. This breed is said to be a sub-breed of the Tibetan Mastiff. Though well-known as a companion dog, they still work as a herder in many parts in its homeland. 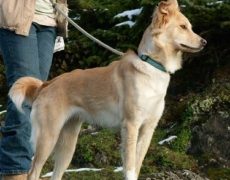 The local tribes have extensively utilized the aggressive yet agile nature of the Himalayan Sheepdogs. They have been used for hunting, herding and guarding, especially as livestock guardians of the sheep and cattle from predatory creatures. They would also hunt down huge games in the rough terrains of the Himalayan Mountains.

With no accurate documentation of its history, experts believe that these sheepdogs have been living in the Himalayan regions of Northern India and Nepal since ancient times.

Known for its loyalty, the Himalayan Sheepdog is a one-man dog that usually creates a strong bond with a single member of its family, in most cases, the owner. They are sweet with children and display a patient disposition, thus making them a great playmate. They are also tolerant of other dogs and pets provided they had been socialized since childhood.

Himalayan Sheepdogs are intelligent and courageous, but at the same time have a bit of willfulness and obstinacy as well. They are alert and would guard the house of its owner dedicatedly, often giving loud barks if they find anything suspicious. Despite making a good family dog, the Himalayan Sheepdogs are not meant to be kept indoors because of their active lifestyle.

Go out for a jog with your dog every morning and evening, with its leash on. Make the sessions last for 30-40 minutes each time. Participate in interactive games, along with your kids, inside an enclosed yard.
To keep your dog’s long coat healthy and in good shape,  brush it at least 3-4 times a week.
There are no reports of any breed-specific problems. Watch out for health issues that usually happen to large size dogs including elbow dysplasia, patellar luxation, hip dysplasia, arthritis, and obesity.

This large, energetic dog must be served 4 to 5 cups of healthy, dry dog food like premium kibble every day.