Crossed between the Golden Retriever and the Great Pyrenees, the Golden Pyrenees is a white dog breed that has colorful markings all over its body. This dog is generally larger than even its Retriever parent, and are highly energetic and affectionate. Usually not suitable for apartment life, these watchdogs need lots of space to play to stay fit. Unaware of its largeness, the dog would often take refuge on its master’s lap. 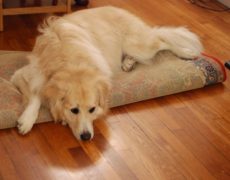 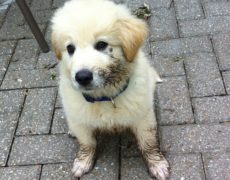 The Golden Pyrenees is gentle and affectionate that is suitable for family life. They are prone to take naps during daytime, but are alert and protective by disposition. They are good with small children, other dogs and people, and would at times get too excited greeting strangers and the owner’s neighbors. Sometimes they tend to display independent and stubborn behavior if not properly trained from puppyhood.

Considering their big size and high level of energy, the golden pyrenees need lots of activities daily. Take them out for brisk walks and jogging every day to assure they stay healthy and in good shape. These dogs love to play (like fetching games etc.) and some individuals would even enjoy swimming. Allowing them to play and run around in an open (but safe) space would help relieve their energy.
Most golden pyrenees dogs would shed a lot, and hence it is not the right dog for those who are looking for a low-shedding breed. Brush them every day, and quite frequently, if you think your dog is shedding too much. These dogs are also prone to developing that typical doggie odor, and hence try keeping it clean and hygienic. Bathing is advisable whenever you get that unpleasant stench.
Generally a healthy breed, they have no known breed-specific problems, but do keep an eye for any general dog health issues.

Socialization training is a general requirement for all pet dogs. The golden pyrenees dogs are often obstinate and would try to act according to its own whims. Hence, a consistently firm training is required. However, if you act diligently to prove yourself its pack leader, the intelligent and easily-trainable dog would learn to be obedient right from its puppyhood. A professional training class should also help.

Feed your golden pyr with high quality general dog food meant for dogs of its size and energy level (like its Pyrenees parent).