A medium sized Pinscher type dog, the German Pinscher had its roots in Germany and also played a significant role in the development of a lot of prominent breeds like the Affenpinscher, Miniature Pinscher, Standard Schnauzer, and the Doberman.  Characterized by a square built and robust, muscular body with a high endurance level, its other prominent features include a wedge-shaped head, dark, oval eyes medium in size, high, set well-set ears,  flat, well-muscled cheeks, robust and elegant neck and a moderately set tail carried above a considerable height. 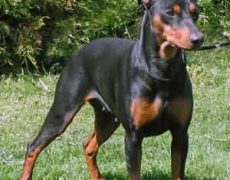 Drawings of this breed date back to 1780, with this breed having its ancestry linked to the ratters existing in most of the German farms during the 15th century. The word “pincer” in French translates to seizing or nipping which is what the German Pinscher did. They were ratters by origin employed to kill vermin and guard property. The German Pinscher was called as the Smooth Haired Pinschers while the Standard Schnauzer was known by Wire-Haired Pinscher, with both of them referred to as one breed before, though later they were separated.

Their numbers had drastically decimated during the Second World War, and none of the litters were registered between 1950 and 1958. Werner Jung, a German, has been credited with saving this breed from extinction and giving to the world the German Pinscher of the present time.

They were introduced in the United States in the latter part of the 1970s and beginning of 1980s. Fanciers of this breed came together to form the German Pinscher Club of America. Several varieties of this breed are extinct at present like the Seidenpinscher and Schweizer Pinscher.

Though brave, tenacious and daring, they are loving and affectionate, making for a friendly family companion. Because of its alert, active and watchful nature, it is extremely wary and reserved towards strangers. It has a loud, strong, assertive bark that is enough to scare anyone intruding into its territory, and it would not stop until he gets an assurance from his owner about the safety of the unknown person, a trait that makes it a good watch and guard dog. They share a friendly rapport with kids, especially the older ones since they are matured enough to deal with its assertive nature. They would also do well with dogs of the family mainly if brought up with them. Keeping their chasing instincts in mind, they should not be kept in homes with smaller pets and rodents since they were bred to kill vermin and have a high prey drive.

This agile, athletic, working breed, have high exercise requirements, needing to be worked out on a regular basis, with long walks at least twice a day and sufficient game time in a fenced yard (since they are adept at jumping and climbing) being its prime requirements. Participation in dog sports like agility, obedience, tracking, and rally would help match the high energy levels of these canines.
Though its short and dense coat need not be highly maintained, though a weekly combing using a brush with natural bristles is essential to maintain the shine. Bathe it occasionally or when it gets dirty, trim its nails one or two times in a month, clean its eyes and ears with a moist or damp cloth and brush its teeth twice or thrice a week to keep a check on tartar buildup.
Some of the common problems your German Pinscher may face include hip dysplasia, eye conditions, heart issues (least possibility), as well as von Willebrand’s disease.

Having a sharp brain, with a decent, intelligent ranking,  it is easy to train since they can learn things pretty fast. However, the Deutscher Pinscher is said to be stubborn and independent, often having a will of its own. Hence a firm taskmaster is needed to handle it firmly and tactfully alongside incorporating positive reinforcement techniques.

Feed your German Pinscher high-quality dry dog food on a regular basis would keep it in sound health.